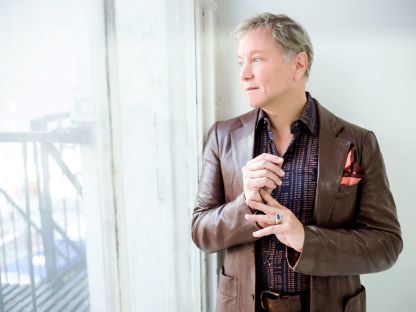 American composer-librettist Mark Adamo’s latest opera, Becoming Santa Claus, was released on DVD/Blu-Ray in September 2017; it was commissioned and introduced by Dallas Opera in December 2015.  The DVD release follows a new production in Boulder, Colorado, which Adamo directed, of a chamber version of The Gospel of Mary Magdalene, his third full-length opera, which was commissioned and introduced by San Francisco Opera in June 2013 and which itself followed a busy season of opera and chamber premières. In May 2012, Fort Worth Opera opened its first production of his second opera, Lysistrata; that September, the Constella Festival in Cincinnati opened their season with August Music, for flute duo and string quartet, commissioned by Sir James and Lady Jeanne Galway: in December, Sasha Cooke and the New York Festival of Song introducedThe Racer’s Widow, a cycle of five American poems for mezzo-soprano, cello, and piano; and, in April 2013, baritone Thomas Hampson and the Jupiter String Quartet introduced Aristotle, after the poem by Billy Collins, in concerts at the Mondavi Center in Davis, California before continuing to Boston and New York under the auspices of the Chamber Music Society of Lincoln Center. Read More

Adamo first attracted national attention with his uniquely celebrated début opera, Little Women, after the Alcott novel. Introduced by Houston Grand Opera in 1998 and revived there in 2000, Little Women is one of the most frequently performed American operas of the last fifteen years, with more than 80 national and international engagements in cities ranging from New York to Minneapolis, Toronto, Chicago, San Francisco, Adelaide, Perth, Mexico City, Brugges, Banff, Calgary, and Tokyo, where it served as the official U.S. cultural entrant to the 2005 World Expo. The Houston Grand Opera revival (2000) was telecast by PBS/WNET on Great Performances in 2001 and released on CD by Ondine that same year; in fall 2010, Naxos released this performance on DVD and on Blu-ray. (Little Women was the first American opera recorded in high-definition television.) Comparable enthusiasm greeted the début of the larger-scaled Lysistrata, Adamo’s second opera, adapted from Aristophanes’ comedy but also including elements from Sophocles’ Antigone. Lysistrata was commissioned by Houston Grand Opera for its 50th anniversary and introduced in March 2005: its New York City Opera debut in March 2006 led to concert performances by Washington National Opera (May 2006) and Music at the Modern by the Van Cliburn Foundation (May 2007) before the new staging of the work at Fort Worth Opera in spring 2012, which was included on the best-of-2012 lists of both D Magazine and the Fort Worth Star-Telegram.

While Adamo’s principal work continues to be for the opera house, over the past 5 years he has ventured not only into chamber music but also into symphonic and choral composition.  Adamo’s first concerto, Four Angels, for harp and orchestra, was commissioned by the National Symphony Orchestra and debuted in June 2007: the Utah Symphony, led by their Music Director Emeritus, Keith Lockhart, presented Four Angels in January 2011. In May 2007, Washington’s Eclipse Chamber Orchestra, for which Adamo served as its first composer-in-residence, performed the revised version of Adamo’s Late Victorians, a cantata for singing voice, speaking voice, and orchestra: Naxos released Late Victorians in 2009 on Eclipse’s all-Adamo CD, which also included Alcott Music, from Little Women, for strings, harp, celesta, and percussion; “Regina Coeli,” an arrangement of the slow movement of Four Angels for harp and strings alone; and the Overture to Lysistrata for medium orchestra.  In April of 2010, Harold Rosenbaum’s New York Virtuoso Singers paired six of Adamo’s newly-published choral scores with the complete chamber-choral work of John Corigliano. This concert featured the New York premières of Cantate Domino (after Psalm 91,) Pied Beauty and God’s Grandeur (Gerard Manley Hopkins; commissioned by the Gregg Smith Singers,) Matewan Music (Appalachian folk-tune variations,) Supreme Virtue (Stephen Mitchell’s translation of the Tao te Ching,) and The Poet Speaks of Praising (Rilke: commissioned and introduced by Chanticleer.)

Composer-in-residence at New York City Opera from 2001 through 2006, where he led the VOX: Showcasing American Composers program, Adamo also served as Master Artist at Atlantic Center for the Arts in May 2003.  Since 2007 he has served as the principal teacher of American Lyric Theatre’s Composer-Librettist Development Program in New York, in which he coaches teams of composers and librettists in developing their work for the stage.

Last Year is a concerto for Solo Violoncello with Harp, Piano, String Orchestra, and Percussion to be premiered by ACO on October 20, 2022 at Zankel Hall at Carnegie Hall.

In 2018, for reasons that don’t really matter now, I’d listened—really listened—to a  new-to-me recording of Vivaldi’s Four Seasons.  And I marvelled: not only at the  score’s vigor and clarity, but at its innocence, too—as it portrayed each season offering its own delights and terrors while still yielding, safely, to the next.  The  recording finished: I turned to the news, and learned that—due to the latest in our  series of once-in-a-lifetime-except-now-every-year storms—a hurricane had left the  city of Houston nearly drowned.

Vivaldi couldn’t write those scores today, I thought. But—if he were alive now, and  knew what we know—what would he write?

Last Year is my answer. While Four Seasons is a cycle of four concerti for violin and  strings, mine is a single concerto in four movements (the last three played without  pause) for the richer-voiced cello; I also add to the string ensemble a choir of piano,

harp, timpani, and ringing percussion.  A fanfare that shifts, uneasily, between the  major and minor modes precedes I: Autumn: Dismissing Eunice.  The title  remembers Eunice Foote, the American scientist who was the first scientist— in  1856!—to describe and theorize what we now call the greenhouse effect. This music  weaves a single melodic thread from Vivaldi’s Autumn concerto into a polymetric  scherzo of nervous and glittering character; it’s interrupted, twice, by a tolling procession of chords in the percussion choir—too slow and separated in register,  just now, to comprise a recognizable theme.  Ignoring those interruptions, the  scherzo barrels headlong to an ambiguous conclusion.

In January of 1998, a once-in-a-lifetime ice storm struck North America, causing so  much havoc that Canada had to deploy more military personnel than the country had sent during the entire Korean War to address the damage. Because the available  images of that storm remain stunningly beautiful—the Canadian terrain seems  rendered an eerily silent ice-sculpture of itself—one could forget that the area south  of Montreal was without power for so many weeks that English media nicknamed it “The Triangle of Darkness.”   Remembering this, my second movement, Winter: Le  Triangle Noir introduces an original theme of hushed, awed character as more  rumours of Vivaldi murmur in the background: when the percussion choir

interrupts again as it had before, its material accelerates and condenses until we can  identify it as one of our oldest musical tropes of warning.

The text which gives that trope its name can be read in the title of the next  movement. Two solo cadenzas—one stunned, one vehement—frame Spring:  Zephaniah 1:14-15, in which the motto from the Vivaldi’s Spring alternately outruns  itself at breakneck speed or slows to a crawl in the lowest registers of both cello and  orchestra: spurred by the racing soloist, the ensemble attempts a final time to  retrieve the feeling, the faith of that baroque theme. It cannot: and the orchestra  refracts into, almost literally, a thundercloud of sound—a cluster which begins in  noise, little by little acquires pitch, and just as gradually loses pitch, evanescing until  only the soloist, serenely maintaining a low B-natural, can be heard.

Now begins, without pause, the finale: Summer: For Julia, born 2045, in which the  cello, in a harmonic landscape emptied of everything but sustained bass tones and  the cries of seagulls, attempts to speak a promise into the future. But—even as the orchestra takes up and develops, harmonically, that determined theme—the solo  cello cannot help, for a moment, but lose itself in recrimination.  Memories of chaos,  and that opening premonition, return to haunt the final moments: but the cello  maintains the last word.

It’s hard to claim that I enjoyed composing Last Year: to try to give voice to the fears  and hopes we experience during this moment of crisis pushed me both emotionally  and technically in ways I’ve never experienced before. But I was, and am, humbled to have been offered the privilege to attempt it. I thank, generally, the consortium of  four ensembles—American Composers Orchestra in New York, New Century  Chamber Orchestra in San Francisco, River Oaks Chamber Orchestra on Houston,  and Manitoba Chamber Orchestra—who committed to the work of a composer who  is, after all, scarcely known for his work outside the opera house; and, specifically,  the woman who has done as much as, if not more than, anyone else of her  generation to support the institutions, composers, and performers who host and  make and play the music that tries to sing the way we live now.  This piece—but not  only this piece—would not exist without her.  With all warmth, gratitude, and  admiration, I dedicate Last Year to Susan W. Rose.