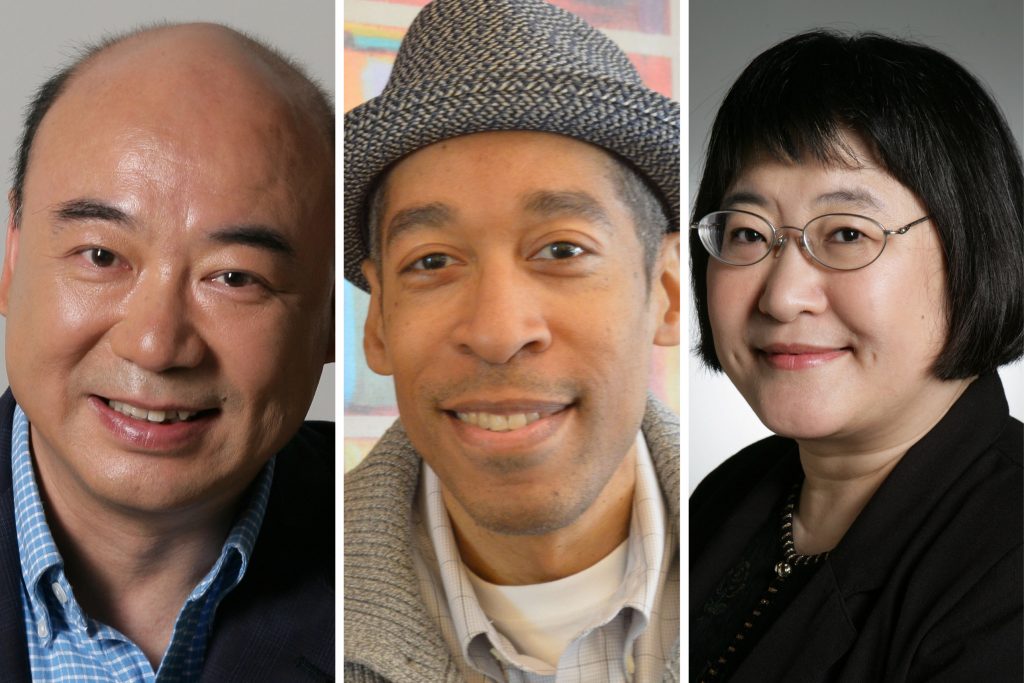 On December 2, Kerwin Young talks with Chen Yi and Zhou Long about their co-composed work, Symphony “Humen 1839,” from 2009. The work commemorates the public burning of over 1000 tons of opium — an event which led to the First Opium War between Great Britain and China. The piece was commissioned and premiered by the Guangzhou Symphony Orchestra in 2009, conducted by Guangzhou Symphony’s Music Director Long Yu. Symphony “Humen 1839” won First Prize in the Sixteenth Chinese National Composition Competition for Symphonic Works, sponsored by the Chinese Ministry of Culture in 2012. The Naxos recording, performed by the New Zealand Symphony and conducted by Darrell Ang, was nominated for a 2016 Grammy.

Join us for this one-hour conversation, during which the composers will guide us through this masterful symphony — complete with listening examples and an exploration of the Cantonese folk music elements in the work.

About Chen Yi: Born in Guangzhou in 1953, Dr. Chen Yi received her composition degrees from the Central Conservatory of Music in Beijing and Columbia University in New York, studying with Profs. Wu Zuqiang, Chou Wen-chung, and Mario Davidovsky. She has been the Distinguished Endowed Professor at the University of Missouri-Kansas City Conservatory since 1998. Chen Yi blends Chinese and Western traditions, transcending cultural and musical boundaries. She has composed over 150 works ranging from solo instruments and chamber groups (over 60), to chorus (over 30), and large ensembles (over 50, including orchestra or wind band, concertos, or mixed vocal and instrumental works), recorded in over 120 commercially released albums on various labels, and received the prestigious Charles Ives Living Award from the American Academy of Arts and Letters in 2001. Published by Theodore Presser Company, her music has reached a wide range of audiences and inspired people around the world. As a strong advocate for new music with diversity and inclusion, particularly for women in music, Prof. Chen has been awarded five Honorary Doctorates in the States and Distinguished Visiting Professorship from many music institutes in China. She has been inducted into the American Academy of Arts and Sciences in 2005, and the American Academy of Arts and Letters in 2019.

About Zhou Long: Zhou Long is internationally recognized for creating a unique body of music that brings together the aesthetic concepts and musical elements of East and West. Winner of the 2011 Pulitzer Prize for his first opera, Madame White Snake, Dr. Zhou also received the American Academy of Arts and Letters Award, the Elise Stoeger Prize from Lincoln Center Chamber Music Society in New York, and the Barlow Prize. He has received commissions from Koussevitzky and Fromm Music Foundation, Meet the Composer, Chamber Music America, and NYSCA, and fellowships from NEA, Guggenheim and Rockefeller Foundation, the AAAL, and New York Foundation for the Arts. Dr. Zhou’s music has been widely performed and recorded on major labels  and published by the Oxford University Press and the Shanghai Music Publishing House. He studied composition at the Central Conservatory of Music in Beijing and Columbia University in the City of New York. Major composition teachers were Profs. Su Xia, Chou Wen-chung, Mario Davidovsky, and George Edwards. He is currently Bonfils Distinguished Research Professor of Composition at the University of Missouri-Kansas City Conservatory.

About Kerwin Young: Kerwin Young is a prolific international concert and media composer, and recording producer, whose music has served as social commentary the world over since 1989. A member-producer of the Rock and Roll Hall of Fame inducted Public Enemy, Kerwin Young is a multi-platinum, Grammy-winning composer/producer of popular music in multiple genres, including film, television, and video games. His works have been performed by Detroit Symphony Orchestra, Kansas City Symphony, University City Symphony, Inscape Chamber Orchestra, Music From China, Del Sol String Quartet, Tesla Quartet, ROCO, and other well-known ensembles. Young studied music composition at the University of Missouri-Kansas City Conservatory of Music and Dance with Chen Yi, Zhou Long, and Jazz Messenger legend, Bobby Watson. Since 2019, he serves as Performing Rights Associate with Next Level, an initiative of the U.S. Department of State, the University of North Carolina at Chapel Hill, and Meridian International Center. Internationally, Kerwin Young is a traveling scholar, lecturing on music composition and production across multiple genres, and entrepreneurship. See: www.kerwinyoung.com