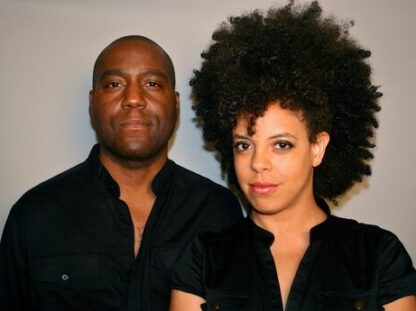 Mendi + Keith Obadike are a married Igbo Nigerian American couple whose work has been recognized for innovations in directed sound and listening, engagement with the cultures of the African Diaspora, and expansion of the field of sound art. Mendi + Keith make music, art, and literature. They have exhibited and performed at The New Museum, Whitechapel Gallery, The Studio Museum in Harlem, The Metropolitan Museum of Art, and The Museum of Modern Art. Their early collaborations were works made for the internet and recorded music. Their current projects include a series of large-scale, public sound art works. Their honors include a Rockefeller New Media Arts Fellowship, Pick Laudati Award for Digital Art, a New York Foundation for the Arts Fellowship in Fiction, and the Louis Comfort Tiffany Biennial Award.

Dream Train is a meditative piece inspired by the mythology of the train in African American music and visual art. At times, the train has represented freedom, heaven, progress, or great change. Rooted in African Indigenous dream temples and the “energy” music of the 60s, Dream Train invites participants to dream together collectively as a form of social intervention. Highly accomplished new media artists, Mendi & Keith will use projection mapping, sound transducers, multi-channel sound system, and film to create an immersive A/V installation, and multi-disciplinary performance featuring ACO musicians and 3 actors.

Dream Train is a new, live, music-centered public artwork inspired by the mythology of the train as a representation of freedom, heaven, progress, and great change in African American music and visual art. We are designing Dream Train for live orchestra, 8-channel sound, and actors at the Winter Garden, Brookfield Place, an unexpected, yet widely accessible space that invites public participation. In this work, the audience seating will be designed to resemble train seating (spaced for social distancing).  The 8-channel (48-speaker) sound system and lighting projection with scrolling custom-designed gobos (projector filters that create lighting designs on surfaces) will be spaced throughout the venue.

Dream Train audiences will access the experience via 1.) ticketed and timed performance with a live orchestra and spoken-word actors and 2) a public art installation that will include acousmatic programs that play for visitors to experience at their leisure. We will create new original works that include a score for a 36-piece orchestra, a script for Singer-Sayers (actors) that features meditations on train mythology, and pre-recorded music and words that we will write and record for the installation. Our multichannel-prerecorded music will play when the orchestra is not present.

Dream Train is part of a series of dream pieces; our interest in sounds, language and music used to induce altered states of consciousness has led us to an extensive exploration of musical forms related to trance, hypnotic scripts, and sleep-related musical practices from around the world. The first of our works in this series is lull, a sleep temple (2020). The language in the title “a sleep temple” references sites in ancient Egypt where people entered a sleep-like state for healing and dreaming. In our cultures (Igbo and African-American) dreams are still understood as extremely important both as symbols and experiences. Sleeping and dreaming are understood as a way to connect to something larger than our conscious minds.

The next piece in the series, Lift, used the melody from “Lift Ev’ry Voice and Sing,” the one-hundred-year-old song often called the Black National Anthem, is slowed down to form a drifting cloud of sound folding back on itself and stretching out over several minutes, underscoring a surreal text about the skies. We used drone-mounted cameras to capture images from the sky and merge those with archival film, original music, and text inspired by this great secular hymn.

These ideas are also relevant in some of the music that influences our recent works. The “energy music” or “spiritual jazz” of the ’60s and ’70s whose most notable practitioners are John and Alice Coltrane and Pharoah Sanders grew out of these musicians’ explorations of other states of consciousness, for example. This “energy music” led to later forms like ambient music and sound art, music with more overt spatial concerns. While our musical language is different, this earlier work helped to inform our current practice.

We think the work of cultivating spaces for listening and dreaming is a social intervention, the first step of the creative process that is essential for social change. It is no coincidence that when articulating a vision for a better world, MLK said, “I have a dream,” a phrase he borrowed from Prathia Hall. Maya Angelou famously referred to herself in Still I Rise as the “…dream of the slave.” The concept of imagining the world we want to create is connected to the activity of the relaxed and restored mind. While the media refers to political uprisings as a “period of unrest,” we have never liked that term as a replacement for revolution; we instead feel the urgent need for rest. We have also specifically felt the need for dreaming, in order to collectively imagine and realize personal and social transformation.

We are interested in creating works that invite individuals to dream in community with one another. We’ve done this with video installations before, but not with live musicians in a public and unconventional space.  Dream Train invites anyone in New York City to enter into a creative, meditative, dreamlike mental state, and to imagine realities that do not yet exist. This creative act is familiar to artists and a powerful, yet uncommon one for many in modern society.