Alex Temple is a composer who loves both the Western classical tradition and the world of pop culture. Uncomfortable with stylistic hierarchies and the idea of a pure musical language, she prefers to look for points of connection between things that are not supposed to belong together. Temple’s music has been performed by many prominent soloists and ensembles – including Mellissa Hughes, Timo Andres, Mark Dancigers, Chicago Composers Orchestra, Spektral Quartet, Fifth House Ensemble, Cadillac Moon Ensemble, and Ensemble de Sade – and she has appeared at venues such as Roulette, Exapno, the Tank, Monkeytown, Galapagos Art Space, Gallery Cabaret, and Constellation performing her own works for voice and electronics.

We spoke to Temple about her new commission from ACO, Three Principles of Noir, which premieres on ACO’s program Phenomenal Women along with works by Valerie Coleman and Joan Tower – Friday, November 2, 2018 at 7:30pm at Carnegie Hall’s Zankel Hall. More information here

American Composers Orchestra: Can you talk about your process for coming up with the idea for this piece?
Alex Temple: The idea of the three principles of noir is something I came up with almost a decade ago when I was spending a lot of time on film messageboards.  Each one is based on a particular movie:  the Double Indemnity principle says that it doesn’t matter how well you plan it, you won’t get away with it;  the Detour principle says that it doesn’t matter whether you actually do it or not, you won’t get away with it;  and the In a Lonely Place principle says that it doesn’t matter whether you actually do it again, cause you’re a bad person anyway.
The plot has been floating around in my head for quite a while too.  It was inspired by the moral unease of film noir, of course, but also by my longstanding love of time travel stories, by Erik Larson’s account of the 1893 World’s Fair in The Devil in the White City, and by the seething wit of Sweeney Todd and the feminist bitterness of Claire Messud’s The Woman Upstairs.  I thought about turning the story into a piece of music for years, but I never managed to find the right context for it until I got the commission from ACO. 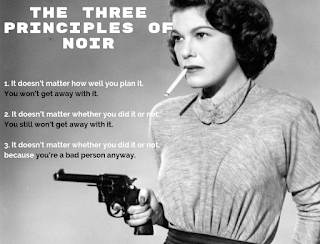 ACO: How did singer Meaghan Burke, director Amber Treadway, and costume design by Storm Garner become involved?
AT: I’ve been friends with all three of them for a long time.  Meaghan and I have worked together before, when I wrote Switch: A Science-Fiction Micro-Opera for Cadillac Moon Ensemble in 2013, and the original plan for this project was to write a sequel to that piece.  Eventually I scrapped that idea and brought in this story of murder and time travel instead.  Meaghan’s numerous vocal styles — sultry cabaret, melancholy Sprechstimme, dreamy spoken flights of fancy — had a huge influence on how I conceived of the protagonist.
Storm is a polymath:  not only a costume designer but also a singer, composer, photographer and filmmaker.  Her work is always imbued with an experimental spirit — including our one previous collaboration, a polystylistic film called And In Her It Danced: An Inheritance, which included my piece This Changes Everything! in the soundtrack.  Amber, meanwhile, has been doing great work in the queer and feminist opera world, directing shows like Kate Soper’s Here Be Sirens and Griffin Candey’s Sweets by Kate, the latter at the Stonewall Inn.  I originally know her from Twitter, which she is the official best at.
ACO: Your bio describes your tendency to “look for points of connection between things that are not supposed to belong together” in your work. What are some things that “don’t belong together” in Three Principles of Noir?
AT: There are all kinds of styles and reference points at play in the piece:  tango, Weimar cabaret, atonal counterpoint, the Great American Songbook, Straussian Romanticism, Robert Ashley monotone singing, Andriessenish sound masses.  All of them relate in some way to the story, the mood, or the period(s) that the piece takes place in.  Theatrical music is a particularly good venue for this kind of eclecticism, because you can use the narrative to unite all the disparate elements.
ACO: Can you talk about your relationship with ACO and the path that lead you to receiving this commission?
AT: I first worked with ACO in 2011, when I wrote Liebeslied for Mellissa Hughes to perform with them at the opening concert of the SONiC Festival.  It was a great experience for all involved, so I was excited when we started talking about collaborating again.  It’s taken several years to put all the moving parts together, including securing a grant from the MAP Fund, going through several different ideas for what the plot might be, getting collaborators on board, and — if I can be candid — delaying the whole project after Trump’s election sent me into one of the worst depressions of my life.  I mention this because I believe that our cultural taboo against discussing mental illness makes it harder for people to find support, and I want to help erase the stigma by being open about my own experiences with it.
For a while I wondered whether I really wanted to write a piece with such a dark ending, under the circumstances.  One thing that helped me was Derek Bermel telling me not to let myself be defeated, and saying that now was my moment to be angry, to be vulnerable, to be subversive.  Three Principles of Noir isn’t about modern fascism, but it certainly is about anger and vulnerability and subversiveness.
ACO: What can the audience expect at the world premiere of Three Principles of Noir, and what are you most looking forward to about the concert?
AT: Listeners should come prepared for bloody schemes, feminist rage, moral ambiguity, academic angst, memorable tunes, convoluted rhymes, electronic collages, and more swears than you’d probably expect to hear on stage at Carnegie Hall.  As for me, I’m just looking forward to finally being able to relax into the role of audience!