Yucong (Zoe) Wang (b. 1993) began studying piano at age six and composition at age 11. She entered the Shanghai Conservatory as the top-ranked student in 2011, studying composition with Professor Gang Chen and Professor Huang Lv. In 2013, she entered the Eastman School of Music to pursue a B.M. in composition. Zoe’s compositions have been performed in Shanghai, the Eastman School of Music, George Eastman House, Strong National Museum, and University of Oregon. Composition awards include second prize in the Confucius Award Composition Competition (2009) for her Chinese instrumental trio, Yi, and first prize in the Young Promise Composition Competition (2011) for her mixed quintet, The Reverse of 12 Hours. She also received the Eastman School’s Belle Gitleman Award in 2016 for her chamber pieces, Five Wright Songs and The Ecstasy of Six Persian Poems.

Zoe’s piece Blackbird: II. Aggregation was selected for the 2017 Underwood New Music Readings where it will be workshopped and read by American Composers Orchestra and maestro George Manahan. Zoe spoke to us about the readings and her piece.

Rehearsals, workshops, and final readings are free and open to the public on June 22 and 23 at The DiMenna Center for Classical (450 West 37th Street, NYC). RSVP here

American Composers Orchestra: What was your reaction to finding out your piece had been selected for the Underwood New Music Readings?

Zoe Wang: To be honest, I did not expect anything from my submission of Blackbird to the Underwood New Music Readings. Blackbird is my very first orchestral piece and during the time of submission, I was going through a period of time when I was seriously debating whether I should continue my music career as a composer. I was so surprised to receive an email from ACO telling me that my piece was selected for the 2017 Underwood New Music Readings. I am so thankful and this opportunity is a great encouragement to me as a young composer.

ACO: Can you talk about your compositional process for Blackbird? Did you start with a broad picture of the piece, or with smaller gestures? At what point did you begin to make decisions about the orchestration?

ZW: I wrote Blackbird in 2016 during my junior year at Eastman School of Music. After I finished taking the orchestration class, I came up with an idea to write a piece for a large orchestra to challenge myself to write for as many instruments as I can. I was eager to hear what my musical vision for a large orchestral could sound like. Then I started to look for a topic that would fit the sound of a big orchestra and was reminded of a French documentary, Winged Migration, directed by Jacques Perrin. I remember that when I was watching it, I was fascinated by its depiction of the movements of birds, and struck by the power of nature that dominates all creatures. I then decided to write two contrasting movements: the first one “Migration” with smooth musical gesture in relatively slow tempo. The second one called “Aggregation,” which I submitted to the reading. “Aggregation” is more lively and energetic; my inspiration for this movement originally came from the film and the futurist painting Swifts, Paths of Movement by American artist Giacomo Balla. I started some sketches on the piano when I composed both two movements, and then orchestrated those sketches. The piece, especially the second movement, has some jazz influences. This influence comes from taking a jazz piano class and lessons with Professor Caramia and Dr. Terefenko at Eastman, and the skills I learned heavily affected the way I composed this piece. I only realized this when looking back after having finished Blackbird, and wasn’t aware of it during the writing process itself. 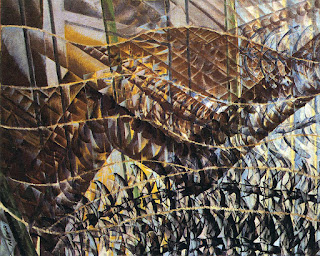 ACO: What are you doing to prepare for the readings? Are there any changes you are making to your piece?

I remember that ACO Artistic Director, Derek Bermel, called me and gave me a long list of suggestions in detail for revising “Aggregation.” The phone call lasted almost an hour. I appreciate Mr. Bremel spending his time to give me a lesson on my piece. After talking with him, I changed the grouping of the rhythm, and the notation for many instruments to make the score even more “readable” for the reading. Also, after having written more orchestral music this past year, I slightly changed the orchestration in the opening and the ending sections.

ACO: What do you hope to gain from the readings?

I am curious to see what my piece will sound like being read by an excellent, professional orchestra. I am also hoping to receive a lot of feedback and suggestions from other composers, conductor George Manahan, all the ACO performers, and my colleagues. The experience of participating in the rehearsal of Blackbird would be helpful for me to think of revisions for the piece afterwards, and encourage me to write more orchestral music in the future. I am also looking forward to hearing the other five composers’ music and listen to them sharing the concepts and processes of their works, as well as getting to know them and their musical ideas.

Rehearsals, workshops, and final readings are free and open to the public on June 22 and 23 at The DiMenna Center for Classical (450 West 37th Street, NYC). RSVP here