Paola Prestini is an “enterprising composer and impresario” (The New York Times), named one of Musical America’s “Top 30 Musical Innovators 2016” and one of NPR’s “Top 100 Composers in the World under 40.” Her works includes commissions by Carnegie Hall, the Chicago Symphony, New York Philharmonic, New York City Opera, and Kronos Quartet.

Paola is the Creative and Executive Director of National Sawdust, a nonprofit Brooklyn-based space for arts incubation, performance, and recording, and serves as “visionary-in-chief” (Time Out New York) of VisionIntoArt, the non-profit multimedia production company she co-founded as a student in 1999.

American Composers Orchestra: You write that in The Hotel That Time Forgot, you wanted to create a sonic orchestral world to relive the memories of The Grand Hotel Palmyra, a hotel in Lebanon across the border from Syria that has not closed its doors since opening in 1894, even as war has raged just outside its doors. Can you talk about these memories and how they are represented in the piece?
Paola Prestini: The memories are observed through flashes in the video [by Mami Kosemura], which is distilled through a keyhole. A mother pouring water to wash oneself in a basin, a suspended chandelier crystal, a child playing, shadows. Everyday action is presented motivically throughout the work and is then deconstructed. Slides in the music are meant to dissolve memories and to mimic the distortion in the film.
Watch the short documentary on The Grand Hotel Palmyra that inspired Paola to write this piece:
ACO: The passing of time seems to be a major theme in your subject material, and also the visuals by Mami Kosemura – you write that “a pendulum gives the viewer the sense of loss of time, and blurred memories.” Can you talk about how time, maybe more specifically this pendulum, is represented in the music?
PP: The Pendulum swings in 45 second installments, and this became a defining structural pillar of the piece. The vibraphone is used as time “hits” to give the sense of a clock striking on the hour. The pendulum lends a certain static quality to the work – I wanted to give the viewer a keyhole look into the joy, anxieties, and subtleties of everyday life, with no apex in the music. The actions continue, time never stands still, and even though memories distort and blur and fade, the pendulum of time continues. The irony and tragedy is that Hotel Palmyra will most likely not continue forever, as it is in a warn torn zone. I had hoped to one day visit, but for now, the stills I’ve seen and film specials on the beauty of the hotel are what I had to go on.
ACO: Can you talk about your composing process for The Hotel That Time Forgot? How long have you been working on it? What have been the milestones and challenges throughout the process?
PP: I have been working on the piece for several months – with Mami conceptually first, and then, as a response to the work. I had a language that I created away from the film, and once I had written that out on the piano, I then worked with the film in mind, orchestrating and fleshing out the music, while keying into specific moments and key points I wanted to emphasize in the visuals.
ACO: How do you hope the audience will feel, and what do you hope they’ll notice while listening to The Hotel That Time Forgot at its premiere?
PP: I feel like this piece, unlike other works of mine, does not have a distinct feeling I want people to feel – not joy, or sadness, or nostalgia. It slides in and out of indistinct memories that have no specific urgency or clear emotion. I want the feeling of the piece to be more of a haze, one that you enter, and that leaves you wanting to keep looking in, hoping to see more, notice more, until the keyhole closes after ten minutes.
ACO: What are you most looking forward to at the premiere?
PP: The chance to hear an amazing orchestra play my work! I’ve been working in multimedia structures for the past twenty years, but don’t often get to work with orchestral tapestries, and I am thrilled to do so under the new tenure of ACO’s new president Ed Yim, and with my brilliant collaborator, Mami Kosemura.
Stills from Mami Kosemura’s visuals: 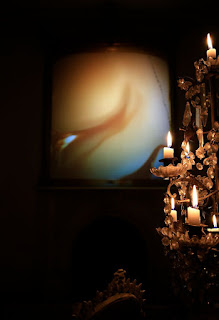 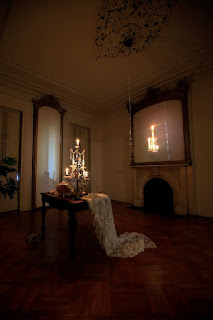 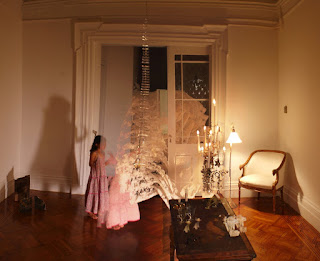 See the world premiere of Paola’s The Hotel The Time Forgot at “Past Forward” on Friday, March 24, 2017 at 7:30pm in Carnegie Hall’s Zankel Hall.