Cody Forrest is one of the composers selected to participate in ACO’s Buffalo Philharmonic EarShot New Music Readings on February 10 and 11. Cody describes his piece To See the Stars Again as a “dialogue of alternating theme groups.” Read the full program note for To See the Stars Again here.
SoundAdvice is posting a running Q&A with Cody to share his EarShot experience.

American Composers Orchestra: What preparations are you making ahead of the readings with the Buffalo Philharmonic Orchestra?
Cody W. Forrest: Most of my preparation for the readings actually happened back in December. To See the Stars Again was first read by the New England Conservatory Philharmonia in December 2013. Throughout the next year I made mental edits, waiting for an excuse to make the physical changes in the score. You can imagine my anguish trying to remember every change that crossed my mind in the last 12 months when I received word of the Buffalo readings. There were a lot of small things to change: dynamic nuances—especially in the percussion—and voicings in the brass and string chorales. I also added a very brief violin solo to end the piece, a much needed color in the sparse texture at the end.

The most significant edit I made was the notation of chaotic brass gestures that take over the piece. I have a tendency to over-rhythmicize improvisatory lines—which was the case here. I remember printing the original version’s first trumpet part and thinking, “They’re going to hate me.” An interesting thing happened in the reading—even though the brass parts in this particular section were marked fff, the brass instead came across mp. I realized my notation was impeding their confidence, and in their attempt to play their parts perfectly, the effect was completely lost. I struggled for months to find a solution that would allow the brass to keep a confident, intense sound yet still keep both the improvisatory effect and the orchestra temporally coordinated. I experimented with Corigliano-esque boxes and actual improvisation, among other failed attempts. The solution that arose was actually quite straight-forward: converting my overly rhythmic gestures into simpler rhythms with grace notes. This cleaned up the notation while maintaining the brazen, chaotic effect I intended. 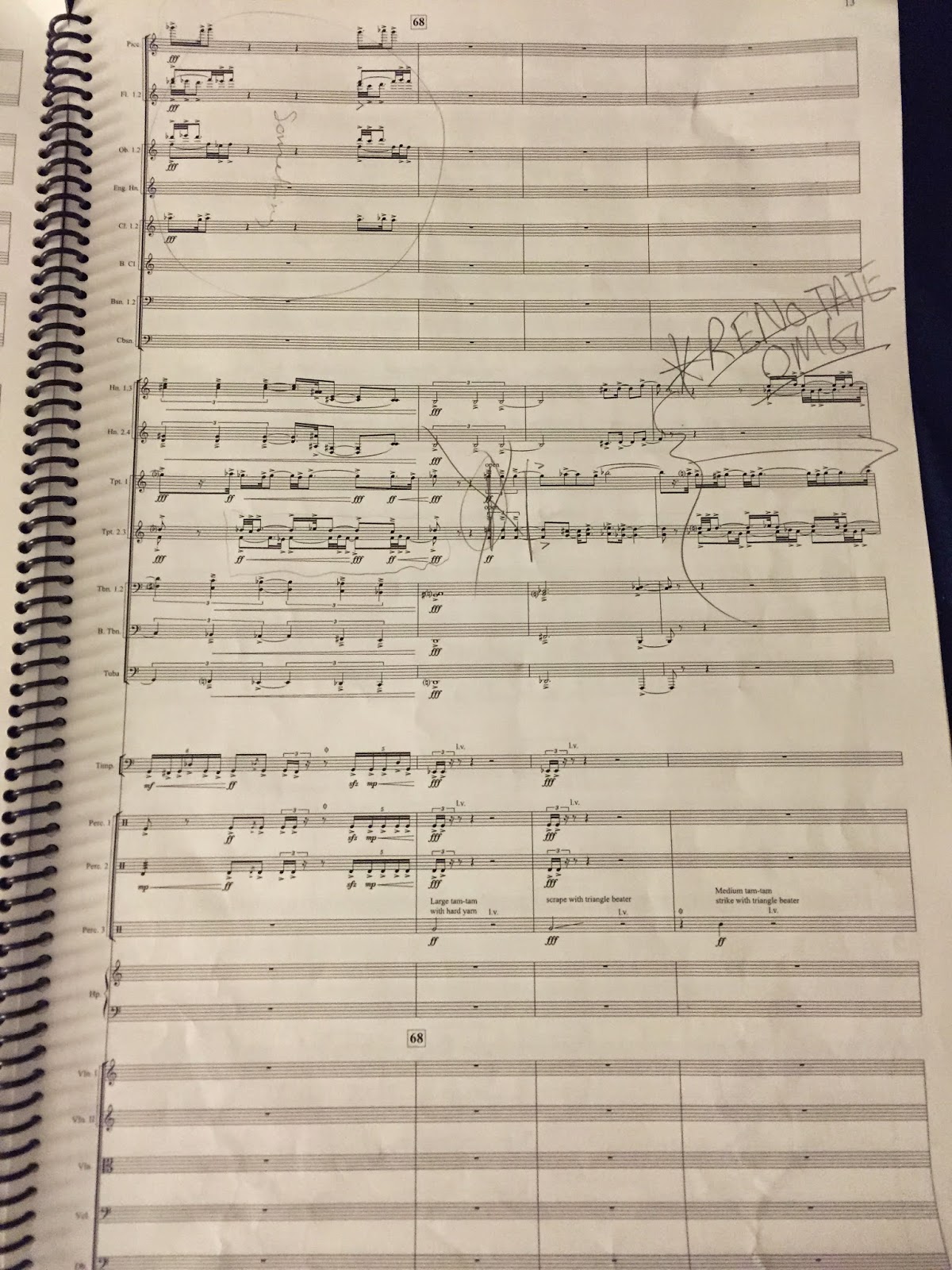 The next step in preparation for EarShot was proofreading the score and parts. Thankfully, I had fairly clean copies of both, only needing to make small edits based on the sections of music that had gone through changes—or so I thought. This spiraled into about 20 hours of engraving work that needed to be done, followed by Bill Holab’s detailed engraving notes. Printing day came, and thanks to the bird-of-prey-like vision of my friend, Kathryn Salfelder, we were able to catch another volley of minute engraving errors—another 4 hours editing what I thought was a near-perfect set of parts—and they’re still not perfect. We rewarded ourselves with 8 hours of tape binding.

The lesson here is: we (composers) always make mistakes—notation mistakes, orchestration mistakes, and especially engraving mistakes, but thanks to incredible (and patient) musicians, our music comes alive despite them. I can’t wait for this to happen at the EarShot readings!

ACO: What was your reaction to finding out your piece had been selected for the Buffalo Philharmonic EarShot New Music Readings?
CF: I was surprised when I received word that my piece had been selected for the Readings. As an emerging artist, it is humbling to receive this honor, especially in such a competitive field. I am excited to be part of the EarShot New Music Readings and very much looking forward to hearing the work of my colleagues, attending the professional development workshops, and working with Stefan Sanders and the musicians of the Buffalo Philharmonic!