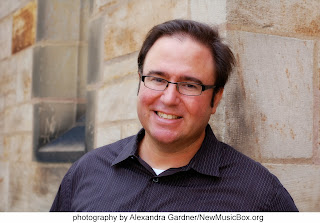 Written for his good friend bassoonist Martin Kuuskmann, composer Christopher Theofanidis’ Bassoon Concerto will be performed by the American Composers Orchestra at the season opening concert, Orchestra Underground: Adding Fuel to the Fire, conducted by Atlanta Symphony Orchestra’s music director Robert Spano, on Friday, October 25. Theofanidis wrote to ACO about his collaboration with Kuuskmann in developing this piece and what it means to him to work with his close friends Kuuskmann and Spano.
American Composers Orchestra: What was the inspiration for your composition?  Can you tell us about your creative process for this piece?
Christopher Theofanidis: Several of the concerti I have written have taken the idea of the individual alone in some metaphoric battle with her/his self. This for me is one of those works.  Within that broader idea, there were specific things that shaped the way I wrote the individual lines and other aspects of the work, such as Balkan ornamentation in the second movement.
ACO: Did you encounter any unusual challenges in writing this work? If so what were they and how did you resolve them?
CT: Ironically, the two technically challenging aspects of the work come from suggestions from the solo bassoonist. Martin asked me to write longer passages in which he could circular breathe; he also was keen to play longer stretches in the highest part of the bassoon’s range, from high C to high F above that. Finding a way to incorporate these two things in an organic way in the piece was part of my task.
ACO: What are you looking forward to about the performance of your piece at Carnegie Hall by the American Composers Orchestra?
CT: Working with my longtime collaborators and close personal friends, Robert Spano and Martin Kuuskmann, and also having them meet for the first time.  They are both such exquisite people.
ACO: What should the audience listen for during your piece?
CT: One thing that I always listen to in a performance of a concerto is the personality of the performer; apart from the music itself, it becomes something of a study in character and that character’s decisions.
Post Views: 156