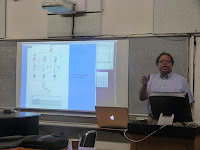 This morning George Lewis gave a class on “electronics and the orchestra.” It was partly his own theorizing about our relationship to technology in broad terms, and partly a discussion of process-oriented techniques involving interactivity, spectral tools, and other topics far less familiar to JCOI participants than other technologies he didn’t cover such as DAWs, synthesizers, and notation software. It was really useful to open up the imagination and get everyone thinking about future possibilities, even if these are techniques that none of us will be able to implement anytime soon given practical constraints. One point he made was that there are fairly few recordings of orchestral pieces involving electronics, something I imagine will change gradually, but still struck me as odd given how long electronic music has been around and how central it is to musical life today. I suppose this just goes to show how successfully the orchestra as an ensemble insulated itself from change in the 20th century, even if composers did develop all kinds of new compositional strategies in writing for it.
After George’s talk was a presentation on engraving and copying by one of the librarians from the LA Philharmonic, Stephen Biagini. He gave a helpful rundown of all kinds of practical information about how to prepare scores and parts for orchestra, as well as common errors and examples of what not to do – the funniest example being a flute part in which the instrument name was appended to the title of a song called How Deep Is Your Love. His detailed advice on how to prepare parts properly was very serious, though, given the time pressures that you’re under in rehearsals with any professional orchestra. He pointed out that by his rough calculation, the cost of rehearsing with the LA Phil is about $300 per minute. 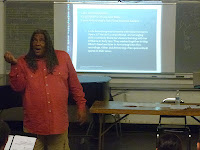 James Newton gave the final presentation after lunch, and I was moved by the fact that James said he had to completely rework his presentation after talking to everyone during the week, since that gave him a better sense of what needed to be addressed. James is an incredibly dedicated teacher, and it really comes through in his presentation style as well as the content. His presentation included not only some good practical advice about how to get started writing for orchestra, but also reflections on a wide range of artists that have been important, personal touchstones for him in his own search to discover his voice as a composer. These included spirituals and Hendrix as well as Mingus, Ellington, Mahler, Ravel, Lutoslawski, Ornette Coleman and several others. One point he made that intrigued me had to do with Ravel’s relationship to jazz. It’s well known that Ravel was influenced by early jazz, but like many others, I had always thought that Ravel’s exposure to actual jazz music was fairly superficial. James cited the book Ravel Studies which apparently details how Ravel studied early jazz deeply through private instruction with a jazz trombonist. James also made an interesting claim that most performances of Ravel’s music – specifically the Piano Concerto in G Major – have not adequately captured the spirit of this connection. As with so many of the faculty presentations this week, this left me with several topics that I’m curious to explore more in the future.
ACO executive director Michael Geller offered an great, impromptu session on commissioning during our lunch break, full of information that will (hopefully!) be useful to us someday. The final session included a run-down of phase two of this JCOI project, in which all of us – and previous JCOI participants – are invited to apply for the opportunity to have a work read next spring/summer in four intensive sessions that they’re now organizing. Although it will be competitive to get accepted, everyone I spoke to was very grateful for the potential opportunity to take forward all the experiences we had this week and put them into practice.

The week ended with a superb concert by wild Up featuring works by all the faculty composers as well as several others. The performers did an amazing job of capturing all the different aesthetic worlds that were represented on the very diverse program. They all seemed to really enjoy themselves and projected a great vibe, like a tight band. They also brought out a large and enthusiastic crowd, which is not easy to do in LA for contemporary chamber music. They’re in residence right now at the Hammer Museum so if you’re in LA, check them out in the coming months there. For anyone new to contemporary classical music, I can’t think of a better way in. Many thanks to Chris Rountree and all the wild Up musicians, many of whom also gave us excellent instrument classes during the week.
I also want to express my deep gratitude to the ACO, especially Michael Geller and Greg Evans who were on the ground organizing constantly all week; to the faculty artists, who not only taught great classes but participated in one another’s sessions throughout the whole week, creating a great feeling of community; and to all the other participants, almost all of whom had to travel a lot farther than me to get here, and made this such a friendly and exciting event. It’s just a start, but a powerful one, and I look forward to seeing what will emerge from all the possibilities that the past week has set into motion. Many thanks!
Post Views: 525