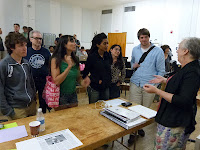 Today was once again packed with energizing conversations and presentations.  We had an instrumental session on piano and harp in the morning, including a  terrific whirlwind demo of many pages of harp technique notations by Anne LeBaron. She vowed to make us all want to compose for harp by showing the  wide range of sounds that can be achieved through conventionally-accepted notations, in addition to demonstrating the fascinating, personal techniques  she uses in her own music.   Following that was George Lewis’ seminar on new approaches to form, a dense  overview of this topic with examples from western music spanning the 20th  century. On One level, George was introducing general trends he sees in  20th-century composers’ explorations in new forms, including “depiction,”  “indeterminacy/open forms,” “repetition” and “noise.” But as with any of  George’s talks (my post yesterday included a disclaimer that I studied with  him closely for years), there were layers within layers of provocative  questions. One of these was his constant weaving together of examples from  European and African American music in order to reveal resonances among  formal innovations in these traditions. In addition, he framed the  presentation by arguing that the dominant discourses of form in common practice western art music – especially notions like “coherence,” “logic,” and “continuity” – should not be accepted at face value, but are instead  ”fraught” in profound ways and can often serve as “ideologies and moral precepts.” If you’re familiar with George’s scholarship, you know that such  comments are the tip of an iceberg of cultural critique and historiographic  intervention, but he also spoke to us more directly as composers when he  brought up the fact that each piece we create involves a choice as to whether or not to use “received forms.” He emphasized that rejecting  received forms forces you to confront the amorphous and difficult question  of how to deal with form, and to examine the relationship between your forms  and materials. 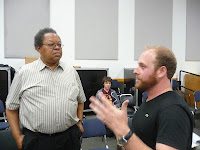 Even though everyone here at JCOI is super polite and respectful, this is a  topic bound to strike some nerves, since it’s hard not to sense at least a  whiff of value judgment in this formulation. One of my favorite moments so  far in the symposium was in the discussion session after George’s talk, when one of the younger participants asked if George thought that it is still possible to find room for innovation within traditional (“received”) formal  approaches. I started thinking that this question can only be approached by  doubling back on the question itself and asking what we mean by “innovation”  to begin with, in a potentially endless loop of deconstruction, but at the  same time I was also thinking about my empty stomach like everyone else in the room, as we were already very late for lunch and this was the last  question before the break. George improvised a quick solution, if not a  resolution: “For now, I’ll just say this: Yes and no.”

Later in the day, Anthony Davis discussed his recent opera Wakonda’s Dream, which I don’t have time to cover here, but was another wide-ranging view  into Anthony’s long relationship with operatic writing, building on his  presentation of Amistad that I discussed in yesterday’s post. Derek Bermel  then gave a presentation on his  music and background that was very  inspiring and helpful for me, and tackled some of the same questions George  raised about form but through a different lens. Among other works, Derek  played an excerpt from a concerto for clarinet that he wrote for himself to  perform with the ACO years ago, one of his first major commissions. He  explained that when he wrote it, he had been deeply immersed in listening to  “What Love” performed by Charles Mingus and Eric Dolphy on a live recording  at Antibes (1960), and that he was fascinated with the musical conversation  between the two, the sense of characters personified through sound. He  recalled that he tried to capture something of the spirit of that music in  the concerto, but was worried at the first rehearsal that the orchestra  wouldn’t be able to play his piece, since the parts involved new kinds of  performance techniques. The conductor urged him to simply start out by  playing his own part, rather than try to explain the techniques first, and  Derek said that once the orchestra heard how he begin to play, they simply  got it and everything worked. This story struck me in connection to the  questions about new performance practices and orchestral culture that I mentioned in yesterday’s post. At least in the context of that specific  piece, it seems like Derek found a solution that allowed him to bring  something powerful to the orchestra that was formed through his own  relationship with improvisatory music. 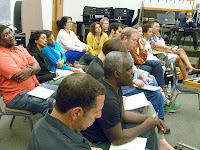 He also spoke at length being immersed in hip hop and other forms of black  music as a white kid growing up in a predominantly black neighborhood in New  Rochelle during the 1970s and 80s. He mentioned being especially influenced by Eric B. and Rakim’s albums when they were first coming out in the late  1980s, and I loved hearing that in this context because I share a deep  respect for Eric B. and Rakim’s albums from that time, even though I’m not  very knowledgeable about hip hop. As Derek talked about what this music  meant to him, I was impressed by how well he navigated this tricky subject.  He didn’t over simplify the questions around race that it brought up, but he  didn’t exploit them in a shallow way either. He discussed formal aspects of  the music and his explorations into analyzing it, rather than just making  vague references to hip hop in order to color his profile as a composer.  He’s written about these and other topics in online essays found here, and this talk intrigued me to check out his writing more in the  future. 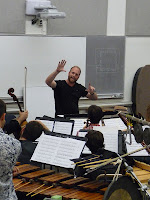 Another intense panel today included three conductors, Carl St. Clair, Steve  Shick and Christopher Rountree. In addition to some useful information about  the mechanics of dealing with orchestras (how much advance time do they need  to get bowing markings into the parts? how should you interact with a  conductor during rehearsals? how big should the score be?), the panel also  moved eventually into some rich questions around improvisation and the  potential for transforming the orchestra and moving away from the assumption  that every orchestra has to be modeled on the great institutions of the  past. Carl St. Clair described his vision for leading the Pacific Symphony to  be “the new orchestra of the 21st century,” and he and Steve Shick, as  orchestral conductors, passionately encouraged us to be part of that larger  process of change, echoing the comments Derek Bermel made about orchestral  evolution in the opening session that I reported in my first post. Steve  made a great point that the best mind set for us to bring to our interactions  with an orchestra is to think of them like a big group of fellow musicians.  It seems simple when I put it this way, but Steve captured this idea  brilliantly in the conversation. But it was also refreshing to hear Carl St.  Clair’s brutal honesty on the pressures and challenges facing even a  conductor such as himself who is already committed to championing new music.  His jaw nearly hit the floor when Christopher Rountree reported that for  tomorrow night’s closing concert of chamber music, they had 25 hours of  rehearsal, exponentially more than the PSO ever has for any single concert.  And Carl also gave some powerful insight into how the current paradigm of  orchestral programming is shaped at a fundamental level by marketing. For  example, he explained that his programming decisions have to take into  account the “data” he’s given on the ticket sales that will be generated by  a choice to program Beethoven’s 5th compared with the 4th, and he commented  that he can’t program as much new music during the weeks when they are  marketing season ticket renewals. For all this darkness, though, there was  still plenty of enthusiasm and a feeling among everyone in the discussion  that such circumstances make it all the more urgent that we work together  now to envision new directions for the orchestra of the future. Citing the  statistic that the average age of the season ticket holder is 65, Carl  eloquently connected JCOI’s aims to the economic crisis facing the orchestra  today, stating that the orchestra “must find new relevance, and that new  relevance is going to be a new identity.”