Jazz Composers Orchestra Institute – Day 1
by Michael Dessen
I’ve been to many festivals, conferences and workshops, but already on day one of JCOI, I can honestly say I’ve never experienced anything inspiring in quite the same way as this. For one, there is the diversity of the 38 participants. They represent a wide range not only in their backgrounds and aesthetics, but also in age. There are veteran artists with decades of important contributions behind them, younger musicians in their 20s just starting to find their voice, and others at every stage in between. Everyone is here to explore new ideas and learn from one another as well as from the faculty, and it’s so refreshing to see this spirit, especially given how many different socio-musical networks are represented here. 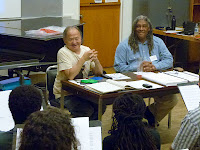 This feeling of mutual support and curiosity was just as palpable among the faculty artists. George Lewis has described the vision for JCOI as a “community-based, sociodidactic” model, and it seems clear that the faculty and organizers have consciously worked to infuse the event with this emphasis on non-hierarchical exchange. Most important was that instead of just showing up for their own classes, the faculty composers all attended and participated in all the day’s events. They intervened with some fascinating comments and questions – such as Alvin Singleton’s mention of a Berio score that mentions Elvin Jones’ name in order to contextualize a performance technique – and they even stayed late into the night to hear the presentations by participants of their own music. 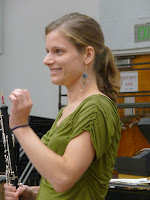 In his preface to a morning class on “orchestral evolution,” Derek Bermel set the tone for the day beautifully by describing how the “tree” of the orchestra needs ongoing care from multiple fronts, an idea that exploded in many directions in the following composition seminar by Paul Chihara and James Newton. As Paul played excerpts from his music, each opened up a different thread of his history, forming a riveting, passionate talk that covered everything from his debt to Duke Ellington’s music to how growing up in a Japanese American relocation camp during WWII shaped his sense of what it means to be a composer. James gave a powerful presentation that challenged us all to find ways to transform the unique experiences and sensibilities that we’ve cultivated as improvisers into notated music, showing some outstanding examples from his own recent, fully-notated works.
There were also two instrumental sessions (violin and woodwinds) which included excellent demonstrations of extended techniques, very well organized and presented by the members of wild Up, and an evening session in which I enjoyed listening to the music of other participants. Looking forward to tomorrow!
34.0522342-118.2436849