Less than two weeks now until the CSO/EarShot readings, and I am admittedly having difficulty concentrating on anything else! I somehow managed to survive part extraction…is there anything more stressful, tedious and ultimately exhilarating than preparing orchestral parts? Even a week later, I still have irrational nightmares that a different measure was left out of every single part, and that somehow I failed to notice this in spite of multiple proof-readings! Alas, sometimes I have to open the files in Sibelius just to make sure… 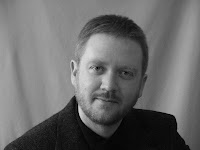 My experiences with this piece are remarkably similar to what Jeremy Podgursky described in his post: it is my composition dissertation, which I worked on for about a year, and I have often wondered if it would ever receive a performance or reading. Though I have written other pieces for small orchestra, this was my first completed composition for full symphony orchestra, and though it was strenuous, I enjoyed working on it more than any other piece in recent memory.
I wasn’t required to write an orchestral work for my dissertation, and many people suggested that I write something more “practical.” While I understood the risks, I felt like it was necessary – I love orchestral music, and had an urge to write something big (relatively speaking, anyway). Upon completion, I dutifully submitted the piece to reading sessions and competitions, often with a MIDI recording (that I spent way too much time on considering how poorly it represents the piece!). After several rejections and a couple of honorable mentions, I figured the piece had just about run its course without a performance…and then the EarShot readings were announced!
I suppose at this point I am quite biased, but even back in November I thought the EarShot readings were a great idea. First off, I was amazed when I was told there was no need to send another score since I had already applied to the ACO Underwood readings – just fill out a brief online application, and voila, it’s done! In fact, it was so easy I completely forgot about it until I read about the Memphis readings after the fact! When John Glover called about the Colorado readings, I think my first reaction was something like a combination of disbelief (really?) and relief (I’m actually going to hear this piece?), and then as it settled in I started to get really excited. Like Jeremy said, I feel very fortunate to be selected.
Well, I better try to get back to work…looking forward to July 16-17!
-Tim Sullivan
Post Views: 138