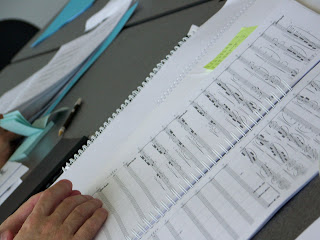 Call it a flaw or tick in my personality, but unresolved issues, no matter how insignificant, manage to gnaw at me to the point of distraction. À propos of the discussion that I initiated in my typically heavy-handed way regarding the use of dotted rests in simple meters, here’s the deal, as far as I can determine after some rummaging through my personal score library. In simple meter (4/4, 3/4, etc., with the quarter note as the unit of beat) a single sixteenth-note that falls on a beat may be followed by either a dotted-eighth rest or a sixteenth rest and an eighth rest combination, in that order. Contrary to what I stated in our meeting, it is not a question of one being more correct than the other or one being used in a newer practice and the other being used in an older practice. It is also not a question of frequency of use (e.g., pieces having many instances of single sixteenth-notes on downbeats are not weighted toward the use of dotted-eighth rests, and pieces with few instances of single sixteenth-notes are not weighted toward sixteenth and eighth rest usage). One method over the other is also not a consistent publisher’s practice (the examples below confirm this) or a publisher’s practice with a single composer (compare A2 and B2 below).
A few examples to consider:

A. Use of sixteenth and eight rest combinations

B. Use of dotted-eighth rests

1.) Igor Stravinsky, ‘The Rite of Spring,’ Kalmus and International scores, one after rehearsal 33 through rehearsal 34, numerous instances in the flute parts.

Clearly, publishing practice tells us that either method is acceptable. I have observed that whichever method is used, it remains constant for the duration of the piece. For your own practice, I advise that you select one way and apply it consistently. If you are ‘on the fence’ about it, I suggest using dotted-eighth rests. They produce cleaner results.

P.S. As an undergraduate, I learned notation from Donald Martino, who was meticulous in every aspect of his composition. Although he practiced and preached the use of dotted-eighth rests, he also was fond of citing the Universal Edition of Berg’s ‘Wozzeck’ as the best resource for resolving notational issues. This edition uses the sixteenth and eighth rest combinations (!) Chalk-it-up to another example of the vagaries of practice and education in this wonderful art of ours!!
P.P.S. Isn’t it fitting that ‘Pierrot Lunaire’ and ‘The Rite of Spring’ employ opposing methods? Serendipity no doubt, but amusing nonetheless.