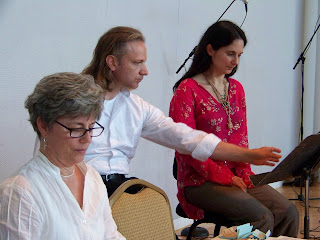 Day two in Memphis was as action-packed as day one! Jean Ahn’s two-movment work Salt and Andreia Pinto Correia’s three movement work Acanto were the centerpieces of the day, read expertly by the Memphis Symphony. Once again maestro David Loebel was more than up-to-the-challenge of these demanding pieces. We had some repeat audience members from the readings the night before. They obviously liked what they heard!
To back up a step, Melinda Wagner and I started the day by leading a lively discussion of the first day’s readings, which, as I wrote about in my first blog entry, featured the works of Patricio Da Silva and Christian Baldini. Following that, Jean Ahn and Andreia Pinto-Correia met with maestro Loebel in preparation for their afternoon readings. After a brief lunch, the readings took place during a two and one half hour period, followed immediately by a ninety-minute discussion/critique class of these two pieces. As was the case in the morning discussion, this too was lively! Melinda and I covered many topics including issues of orchestration, notation, composition and aesthetics, as well as the practical issues of communicating with a conductor and an orchestra in a time–constrained rehearsal situation: a slice-of-life in the real world of orchestral performance.
Following that, we had a working dinner in which representatives from the orchestra (concertmaster, principal bassoon, timpanist, principal horn, etc.), along with David Loebel, gave their critiques and commentary to all four composers, drawn from comment sheets that were prepared by members of their respective sections. As with all events, Linda Golding, Michael Geller, and John Glover were present. Amy Gill, the MSO’s Director of Operations was also present. This was a great way to conclude the formal proceedings of this event. Listening to the 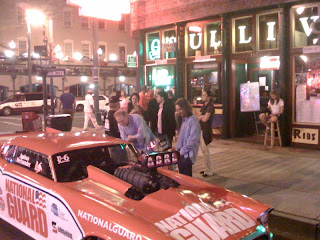 se comments was a learning experience for all of us.
After a brief rest back to the hotel, I joined the composers along with Michael, John and Linda, for a night out on Memphis town. Alas, the timing was not right for a trip to Graceland, but we had great fun unwinding on Beale Street. I got an unexpected glimpse of the Gibson guitar factory, which for an electric guitarist is like a trip to the holiest of shrines. (My first ‘real’ guitar was a 1969 Les Paul custom, purchased new in that year. I should have kept it (!), but I later traded it for a 70’s ES-175 that remains the crown jewel of my guitar line-up. Not a bad exchange, but…)

images:
1. Michael Gandolfi talks with Andreia Pinto-Correia during the reading of her work Acanto. Melinda Wagner (front) studies the score as well.
2. The group checks out a car on Beale Street.