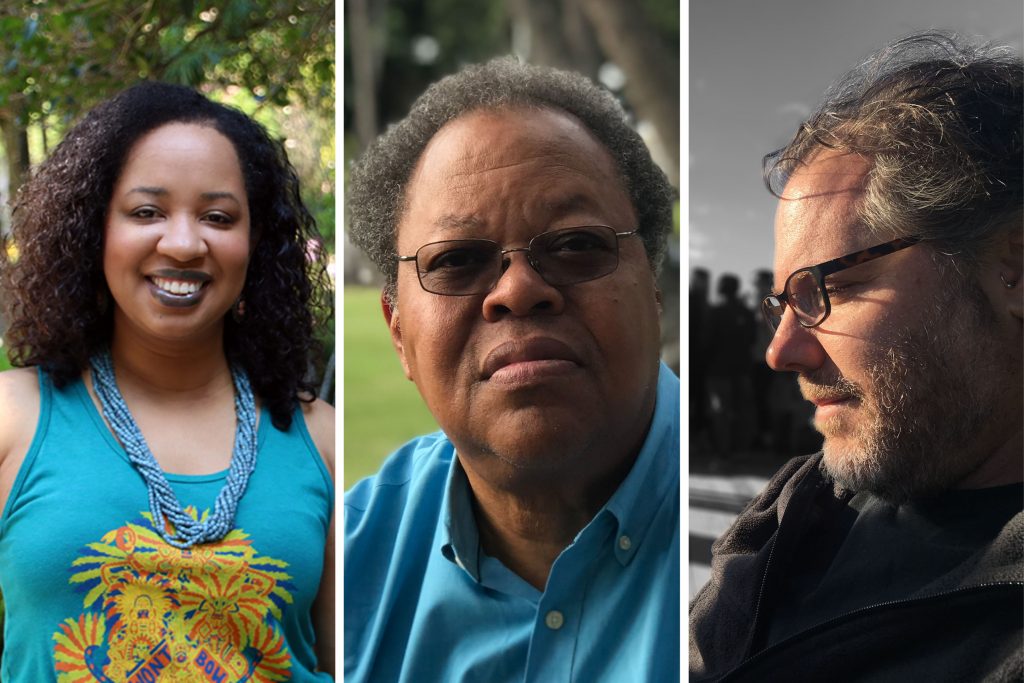 On November 18, Courtney Bryan and Damon Holzborn will talk with George Lewis about his Virtual Concerto from 2004, a piece for improvising computer piano soloist and orchestra, written for ACO. The New York Times described the premiere, writing, “the soloist was a computer-driven piano, its software programmed to ‘react’ to aspects of the orchestra’s performance.”

George Lewis, Professor of American Music at Columbia University, Area Chair in Composition, and member of the faculty in Historical Musicology, is a Fellow of the American Academy of Arts and Sciences and the American Academy of Arts and Letters, a Corresponding Fellow of the British Academy, and an Honorary Member of the American Musicological Society. Lewis’s other honors include a MacArthur “genius” Fellowship (2002), a Guggenheim Fellowship (2015), and the Doris Duke Artist Award (2019). A member of the Association for the Advancement of Creative Musicians (AACM) since 1971, Lewis’s work in electronic and computer music, computer-based multimedia installations, and notated and improvisative forms is documented on more than 150 recordings. His work has been presented by the BBC Scottish Symphony Orchestra, Ensemble Dal Niente, Ensemble Intercontemporain, London Philharmonia Orchestra, Talea Ensemble, International Contemporary Ensemble, Musikfabrik, Mivos Quartet, London Sinfonietta, Spektral Quartet, and others; his opera Afterword (2015) has been performed in the United States, United Kingdom, and the Czech Republic. He is the author of the award-winning book, A Power Stronger Than Itself:  The AACM and American Experimental Music (University of Chicago Press 2008), and co-editor of the two-volume Oxford Handbook of Critical Improvisation Studies (2016). An Honorary Member of the American Musicological Society, Lewis holds honorary doctorates from the University of Edinburgh, New College of Florida, and Harvard University.  Lewis’s music is published by Edition Peters. See https://music.columbia.edu/bios/george-e-lewis

Courtney Bryan is “a pianist and composer of panoramic interests” (The New York Times). Her music is in conversation with various musical genres, including jazz and other types of experimental music, as well as traditional gospel, spirituals, and hymns. Bryan has academic degrees from Oberlin Conservatory (BM), Rutgers University (MM), and Columbia University (DMA) with advisor George Lewis, and completed postdoctoral studies in the Department of African American Studies at Princeton University. Bryan is currently the Albert and Linda Mintz Professor of Music at Newcomb College in the School of Liberal Arts, Tulane University. She was the 2018 music recipient of the Herb Alpert Award in the Arts, a 2019 Bard College Freehand Fellow, a 2019-20 recipient of the Samuel Barber Rome Prize in Music Composition and is currently a recipient of a 2020-21 Civitella Ranieri Fellowship, and a 2020 United States Artists Fellow. See www.courtneybryan.com

Damon Holzborn is a Brooklyn-based musician, new media artist, and software developer. As a musician, he is an improviser and composer who works primarily with electronics. In performance he uses custom software, traditional effects, and interactive processes. Holzborn has long relied on instruments that he develops for use in his own compositions and performances, creating software that produces dynamic instruments that are particularly effective for improvisational performance. Holzborn has presented his work in the U.S., Mexico, Canada, Europe and Japan, performing as a solo artist and with several ensembles, including Donkey – a decades-long collaboration with musician/filmmaker Hans Fjellestad. He was a founding member of the Trummerflora Collective (1999-2009), a group whose aim was to create a fertile, varied, self-sustaining environment for experimental and improvised music. In addition to instruments he creates for his own work, he collaborates with other artists to produce custom technology for use in performances and installations. Previous work includes software or hardware for George Lewis, Eric Metcalfe, Miya Masaoka, Hans Fjellestad, and Duane Pitre. See www.damonholzborn.com